Weather Update Today, Mausam Ki Jankari: Winter has arrived in most of the states of North India including Delhi, UP. For the last two days, the minimum temperature in Delhi is being recorded around 8 degree Celsius, which is about 4 degree less than normal. At the same time, a slight improvement has also been seen in the air of Delhi. At the same time, according to the Meteorological Department, there may be some further drop in day and night temperatures in parts of North West, Central and East India. 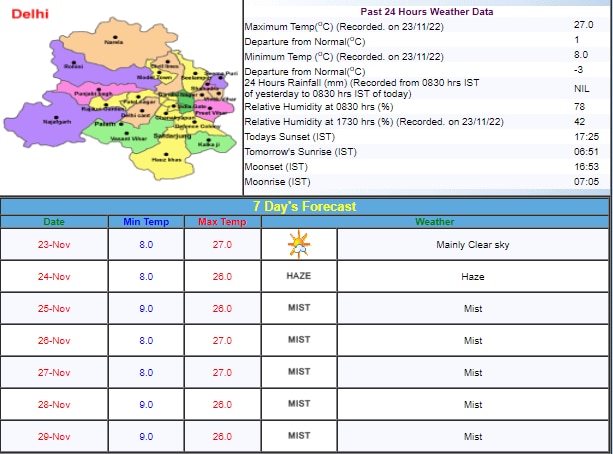 Know the weather condition of your city

weather condition of rajasthan
The torture of winter has started increasing in Rajasthan. Due to the effect of cold winds, a drop in temperature is being recorded in various districts of the state. The coldest day of the season has been recorded in Fatehpur Shekhawati on Wednesday. Where, chill is being felt with the minimum temperature reaching 3.8 degrees. Ons drops have started freezing in the fields of Fatehpur district. According to the forecast of IMD, the temperature in Fatehpur Shekhawat may go up to the freezing point this month.

According to weather forecast agency Skymet, Andaman and Nicobar Islands may receive light to moderate rain with heavy rain at one or two places. Light to moderate rains are possible over parts of Andhra Pradesh, Tamil Nadu and South Interior Karnataka. At the same time, light rain is possible at one or two places in the remaining parts of Karnataka and Rayalaseema and Lakshadweep.