King Khan of Bollywood Shahrukh Khan and his wife Gauri Khan also hoisted the tricolor at their home. Whose videos and photos he has also shared on his social media. In these photos, Shahrukh is seen with his wife Gauri and their children Aryan Khan and Abraham Khan. Sharing the video, Shahrukh wrote in the caption that ‘Teach the youth at home how freedom fighters sacrificed for the freedom of our country India. But we were very proud of the flag hoisting by these little kids. Also a lot of love and happiness.

Bollywood’s Bhaijaan Salman Khan also wished his fans a happy Independence Day. Salman Khan has shared a photo on his Instagram in which he is seen holding the national tricolor in his hand. Sharing this photo, he wrote in the caption that ‘Wishing everyone a very Happy 75th Independence Day…Jai Hind.’

Krishna Pandit of The Kashmir Files i.e. Darshan Kumar, who has made a place in the hearts of people with his best acting, has also wished his fans a Happy Independence Day. He has shared a post on Twitter in which he is seen taking a selfie with the flag installed at his house. Along with this, he has written in the caption that ‘Bharat Mata Ki Jai….Jai Hind Hashtag Har Ghar Tiranga.’

Actress Sara Ali Khan, who has created magic for her performance in Bollywood, has also congratulated the fans on the 75th Independence Day. Sara has shared a collage on her Instagram story. In which three of his photos are seen. In which she is wearing white, orange and green outfits. In a picture, she is seen with her mother Amrita Singh. 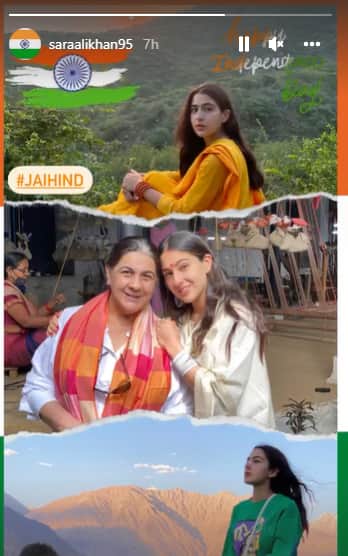 Veteran actor Kamal Haasan has also shared a Tamil post congratulating his fans. He has shared this post on his Twitter, in which he has written that ‘My heartfelt wishes to all the Indians who are celebrating the 75th Independence Day. If you have forgotten history, you will have to go back to the same old days.’ Along with this, the actor has also urged not to forget his history.

T20 World Cup: If Bumrah is not fit then this legend will play T20 World Cup! big update came