Big Boss fame and actress Urfi Javed has received death threats on social media. The information of which has been given by the actress herself on her Instagram. aka Javed has shared a screenshot of the personal message on Instagram Story. In which a person is threatening him in the name of religion. Urfi has also tagged Mumbai Police in his story.

In fact, Urfi had shared the video of the killers expressing displeasure over the painful murder of a tailor named Kanhaiya Lal in Udaipur. After which he started receiving threatening messages. Replying to Urfi’s video, a person named Sajid Chippa wrote, “Shut your mouth witch, what do you know about Islam. If someone is deceiving about our prophet, how can we leave him?

Sharing this, Urfi tagged Mumbai Police and wrote, “I am going to file a complaint against this. Who is threatening to kill in the name of religion. This will be a lesson for all those fanatics. Enjoy your jail time Sajid.”

Urfi Javed had shared the video of criminals in which he himself is telling that he killed Kanhaiya Lal. Sharing which Urfi wrote that Allah did not ask you to hate and kill in your own name. 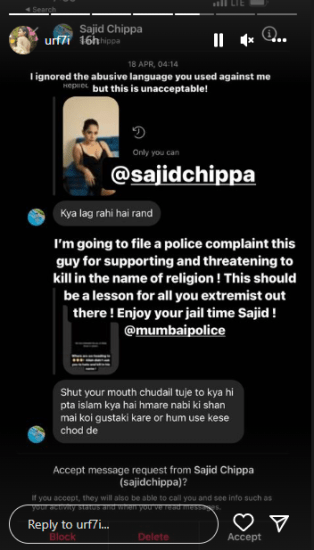 Let us tell you that apart from Urfi, many Bollywood actors are condemning this incident. Gauahar Khan, Ranvir Shorey and Kangana Ranaut as well as political and minority group leaders have called the incident tragic. Police have arrested both the youths. At present, it is being investigated whether the two have alleged terrorist links or not.

Why was Kanhaiya Lal murdered? The issue of former BJP leader Nupur Sharma’s statement regarding Prophet Mohammad has not been resolved yet. Nupur had given a controversial statement on Prophet Mohammad during the debate. After which he was suspended by BJP. There was protest all over the world regarding Nupur Sharma’s statement. Meanwhile, innocent Kanhaiya Lal supported Nupur’s statement. For which he received threats and was killed.

Last chance: Bikes and vehicles of these companies will become expensive from tomorrow, know details

Last chance: Bikes and vehicles of these companies will become expensive from tomorrow, know details