The enmity between Bollywood and Kangana is not hidden from anyone. But recently, Kangana, who has been cut off from Bollywood, has told Salman Khan as her own. Actually, Salman Khan congratulated her while sharing the trailer of Kangana’s film ‘Dhaakad’. After which Kangana has thanked him.

The second trailer of Kangana Ranaut’s film ‘Dhaakad’ released on May 12. In which Kangana was seen doing action. Fans liked his action scenes a lot. Bollywood’s Dabangg Salman Khan also liked the trailer of Kangana’s film, so he shared it on his social media handle and congratulated the entire team of Dhaakad.

Kangana said – thank you my Dabang heroPosting the scenes of Salman Khan’s post, Kangana wrote on her Instagram, “Thank you my Dabang Hero, who has a heart of gold. Now I will never say that I am alone in this industry. Thank you on behalf of the entire Dhakad team.” 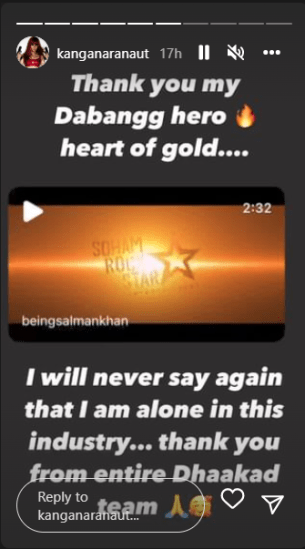 Amitabh had also posted: Let us inform that apart from Salman Khan, Amitabh Bachchan also posted about Kangana’s film. But after some time he also deleted it. Actually the song of the film ‘She is on fire’ has been released. This song was shared by Amitabh Bachchan on his social media. He deleted the post a few minutes later.

Kangana said that the person who praised me will be boycotted from the industry: After which Kangana talked and questioned about deleting the post by Amitabh Bachchan at an event. Kangana was asked why her film ‘Dhaakad’ was not praised by Bollywood actors? To which Kangana replied, “There are powerful people in this industry. But somewhere people have a lot of personal insecurities. While some people fear that they will appreciate me or my film, they will be boycotted from the industry.

Question asked to Amitabh: Kangana further said that people have their likes and dislikes. But I am surprised by what Amitabh Bachchan did, he removed the post for my film within 5 minutes. Kangana said who would have pressure on a big personality like Amitabh Bachchan. I can never explain why I deleted Big B’s ‘Dhaakad’ trailer after tweeting it.”

Good luck to the brave? Nearly half of bitcoin holders suffer – Connexionblog

IPL 2022 Purple Cap: Yuzvendra Chahal, adorned with Wanindu Hasaranga’s head, became the identity of the ‘cap’, 2 wickets made the ‘game’

Bank of Baroda brought an opportunity to buy property cheaply, you can bid like this