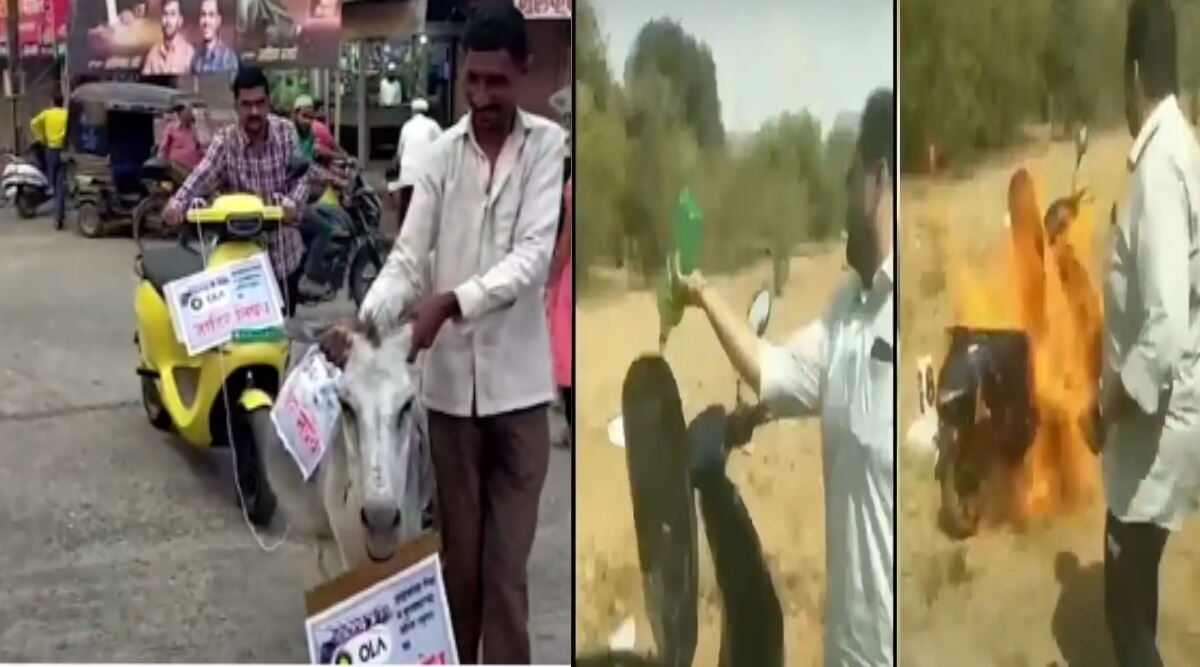 Customers are not getting some satisfactory feedback regarding Ola Electric. After the fire at Ola Electric, many controversies have come to the fore. In the meantime, two strange cases have come to light regarding Ola e-scooter. In which a customer angry with the company tied Ola’s e-scooter to a donkey and drove it across the city, while in the second incident, a person sprinkled petrol and set the e-scooter on fire.

tied with a donkey and roamed the whole city
Dissatisfied with Ola’s e-scooter, a man from Maharashtra, in a unique protest, tied the e-scooter to a donkey and drove it across the city. Along with this, Sachin Gitte of Beed district asked people not to trust the company through posters and banners. “Beware of this fraudulent company Ola”, and “Do not buy two wheelers from Ola Company”. Let us tell you that Sachin had booked Ola’s e-scooter in September 2021, after which the e-scooter was delivered on March 24, 2022.

This was the reason for the protest
According to a report in ABP News, Sachin says that the two-wheeler stopped working just six days after he bought it. After contacting the company, an Ola mechanic checked his scooter. But no one came to fix it, due to which they tied the e-scooter to a donkey and drove it across the city. Earlier they had also made several calls to the customer care but did not get the correct response. Complaint has been made in consumer forum. A local news channel LetsUp Marathi shared the video of the incident on Instagram.

E-scooter caught fire
In a recent incident, an owner of Ola S1 Pro allegedly set his scooter on fire. After which its video is becoming increasingly viral on the Internet media. According to a report, Ola S1 Pro owner Dr Prithviraj burnt the scooter because he was unhappy with the performance and range of the scooter. Reports further stated that he got the electric scooter three months before the incident and faced problems with the scooter.

Investigation was done after complaint
Moreover, the person had earlier complained to Ola Electric regarding the same issue. The scooter was checked by Ola Support and said to be in good condition. But when the e-scooter broke down after 44 kms, the person got angry and set his scooty on fire by pouring petrol. The incident took place near Ambur Bypass Road in Tamil Nadu. Let us inform that recently the company has recalled 1,441 units of e-scooters.

Companies should take immediate steps: Gadkari
Amid the recent fire incidents in electric two-wheelers, Union Road Transport and Highways Minister Nitin Gadkari on Tuesday asked companies to take immediate steps to bring back faulty vehicles. He said that with the mercury rising in March, April and May, there is some problem with the battery of electric vehicles (EV). The Road Transport and Highways Minister said that the country’s EV industry has just started functioning and the government does not want to create any hurdle for them. But security is the most important thing for the government.

Visit: A bill for a healthier Czechia? Prevention Can Bring 700 Billion – List Reports

Photo of Nidhi Bhanushali of TMKOC going viral for its background– TMKOC’s Sonu was posing, something like this behind, see Viral Photo

Photo of Nidhi Bhanushali of TMKOC going viral for its background-- TMKOC's Sonu was posing, something like this behind, see Viral Photo