Two videos of Khargone are now going viral on social media, in which one video is being taken to boycott a particular community, while in the other video it is being announced through van that ‘heretics’ should be boycotted. . After the violence on Ram Navami in Khargone district of Madhya Pradesh, the ruckus may have calmed down a bit, but now many videos have started going viral on social media. Two of these videos are such in which people are talking about boycotting a particular community in the district. According to media reports, this video is from Ubri village of Khargone district.

In the first video, oath was taken to boycott ‘heretics’

It can be clearly seen in the first video that the swearing-in ceremony was allegedly organized by an organization called ‘Gayatri Parivar’ at a temple where a woman was taking an oath to boycott a particular community along with others. He was seen taking oath. According to the video, he took the oath that “From today we take a pledge not to buy clothes, slippers or any other item from the shops of ‘heretics’. Nor will we sell any goods to them. O Mahakal, give us the strength and will to fulfill our resolutions.”

In the second video, boycott appeal is being made to a van with a sound box

At the same time, the second video is also becoming very viral on social media, which went viral on 25 April. In the second video you can see that a van with a sound box was roaming the streets making a public announcement, urging the residents of the Hindu community to boycott those who were involved in stone pelting during Ram Navami violence. were involved.

This van with sound box announced that, “Give a befitting reply to the riots against our Hindu brothers in Khargone and the stone pelting by these unrighteous people… I appeal to all my Hindu brothers to oppose them fiercely, and I appeal to my mothers and sisters that don’t buy anything from their shop“

The circular for indefinite closure of Khargone is also going viral

Not only this, a circular is also becoming very viral on social media. In which Sargon has been asked to be locked up indefinitely. This poster has been issued by the alleged Sakal Hindu Samaj, Khargone. in which it is written “Khargone Bandh Indefinitely…It is informed to all you Gross Hindu Merchant brothers and sisters that the entire entire Hindu society in protest against the government-administration not taking proper action against the rioters regarding the incident of riots that took place in Khargone city in the past. Establishment will remain closed indefinitelyFinally, in this post, an appeal has been made to all the Sanatani brothers for cooperation. According to the viral post, it is of April 17. 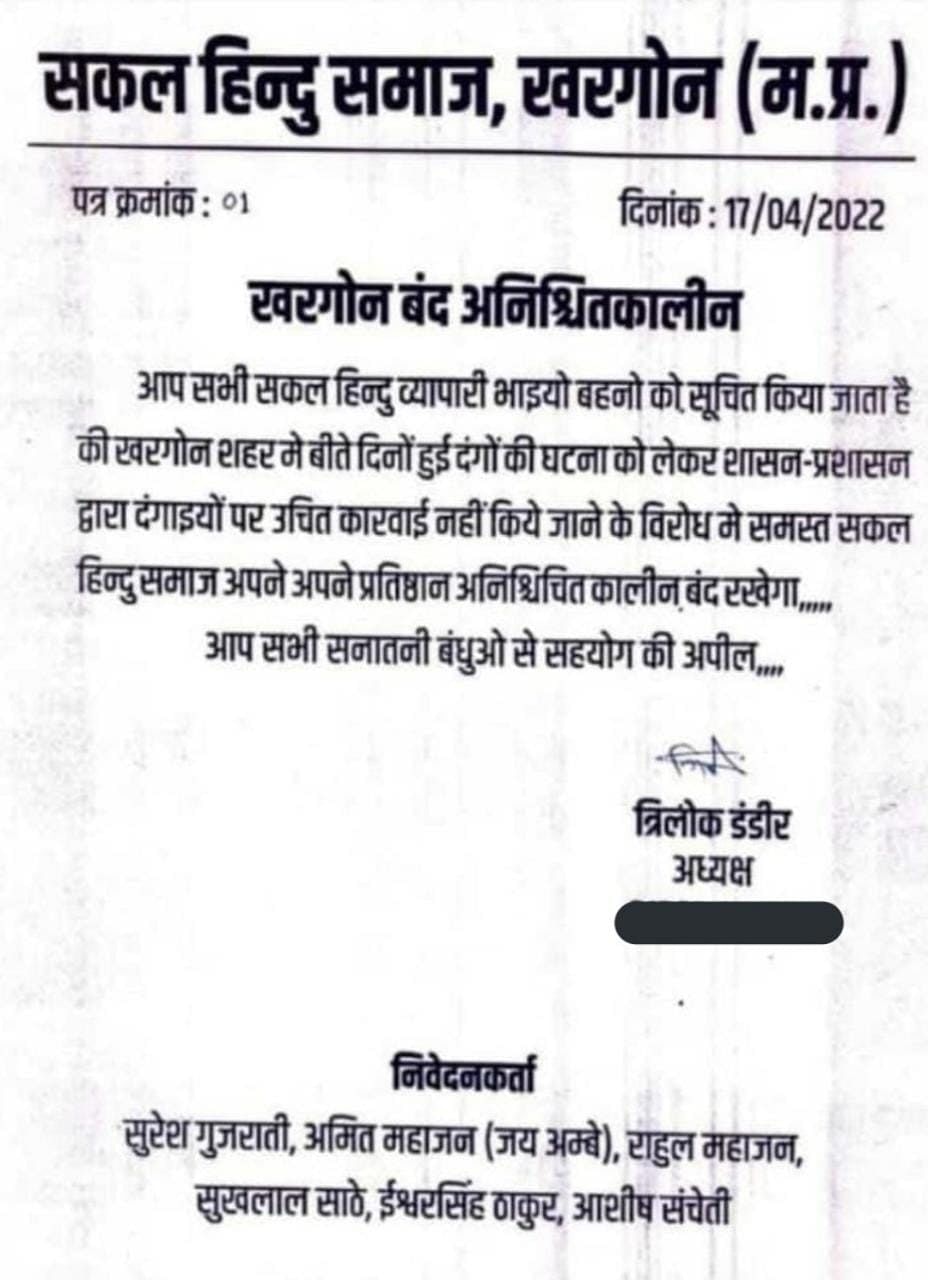 At the same time, when the police administration was talked about this video and circular going viral on social media, they said that an FIR has been registered in this matter and the viral video is being investigated.

Great danger of nuclear war in front of the world, Russian Foreign Minister Lavrov warned of the danger of Third World War

India is emerging as a ‘hard power’ in the world, said Union Minister Anurag Thakur in Raisina Dialogue

Urfi Javed Beauty Secret: Banana is the secret of Urfi Javed’s beautiful and youthful skin, you can also use it like this

Lei vs Ind: Out or Not Out? Shardul Thakur himself was not convinced, the batsmen were also disappointed by the way, watch the video

India is emerging as a 'hard power' in the world, said Union Minister Anurag Thakur in Raisina Dialogue