Kangana Ranaut was seen worshiping, the actress gave heartfelt wishes to everyone on Mahanavami

Mumbai: The festival of Maha Navami is being celebrated with joy and enthusiasm all over the country. The ninth date of Shardiya Navratri is called Mahanavami. On the day of Mahanavami, the Siddhidatri form of Maa Durga is worshipped. While hordes of devotees are reaching the temples to seek the blessings of Maa Durga since morning, everyone, from politicians to actors, are congratulating them on the holy day. Many celebs are congratulating the fans by sharing photos of their festival mood on social media. Bollywood actress Kangana Ranaut has also congratulated the fans while worshiping.

Kangana Ranaut has shared two photos on her Instagram. In one photo, she is seen standing in front of the temple, meditating in worship with incense sticks in her hand, while in the other she is seen standing silently. Kangana is looking very beautiful in a cream golden color saree. Sharing her photo, the actress wrote in the caption – ‘Happy Maha Navami’. 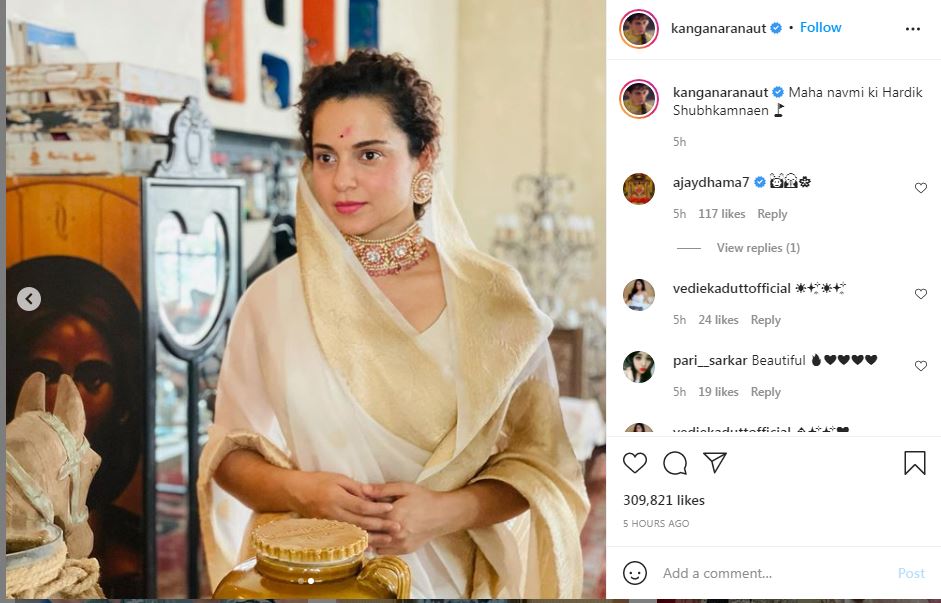 Kangana Ranaut often takes part in religious rituals. The actress, who has unwavering faith in worship, deities, went to the Isha Foundation ashram in the past. In the ashram, he had shared photos of Mata Bhairavi worshiping and lighting lamps on social media.

Let us tell you that Kangana Ranaut’s famous film ‘Thalaivi’ has been released on the OTT platform after its release in the cinema halls of the country. The film has been released in Hindi on Netflix and in Tamil and Telugu on Amazon Prime Video. The film has been released internationally on the online streaming platform. The film is getting good response. Kangana Ranaut is celebrating its success by sharing screenshots on her Insta story. Even today, by sharing an Insta story, he has told that ‘Thalaivi is currently being seen a lot in five countries UAE, Oman, Pakistan, Sri Lanka and Bangladesh’.