Amazing feat of Parineeti Chopra, football played at an altitude of 11 thousand feet in Nepal

Mumbai: Bollywood actress Parineeti Chopra is working in Sooraj Barjatya’s upcoming film Unchai. The actress has reached Nepal for the shooting of this film. Parineeti has given information about this by sharing photos and videos on social media. The actress shared a BTS video, in which fans are praising her for her courage.

The actress wrote in the caption with her video, ‘Playing football with small girls in the streets above 11000 feet from the sea. Life for me is a collection of such simple heart touching moments. Fans are seen praising the actress fiercely on this post. At the same time, Bollywood actor Sooraj Pancholi also liked this style of Pari.

Before this, Parineeti had earlier shared her photos from Everest and wrote ‘Good morning Mr. Everest, today you taught me the lesson of humility’. 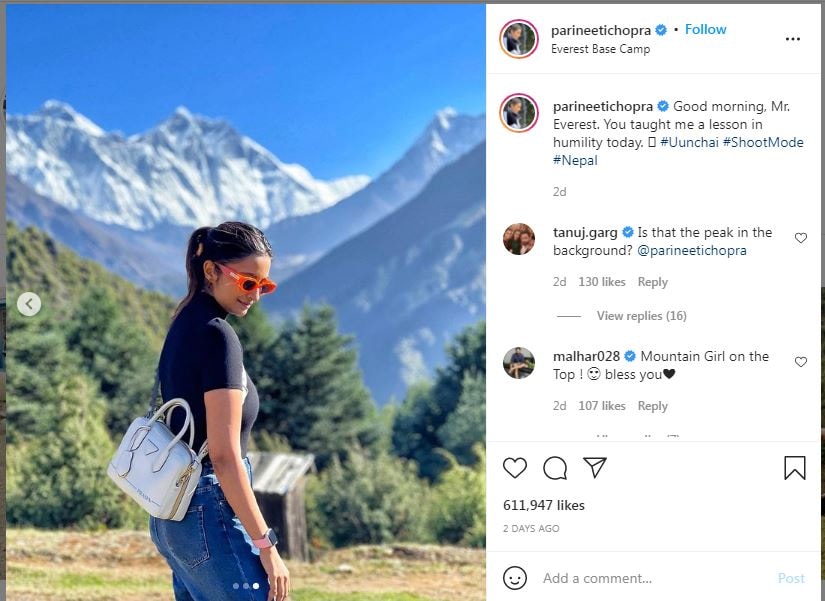 Parineeti Chopra shared candid pictures with filmmaker Sooraj Barjatya on Monday. Along with this it was written, ‘I am thrilled and honored to be a part of the iconic cinematic world of Sooraj Barjatya sir. Sooraj Sir is the guide of Family Entertainment in India. I can’t wait to start working with him and a wonderful cast. Mr Bachchan, Happy Birthday Sir! It is a special day and a special moment. Especially looking forward to working with Anupam sir, Boman sir and Neena ma’am once again. Will be working with Sarika ma’am and Danny sir for the first time. Let’s start this magical journey.