Ram gopal verma married hell and divorce compared to heaven, once he himself did ‘obscene dance’ with the girl!

The news of the separation of South Cinema’s superstar actor Nagarjuna’s son Naga Chaitanya and daughter-in-law Samantha Akkineni has shocked everyone. There were reports in the media for the last many days about the crack in the relationship between the two, on which the couple has now confirmed. Papa Nagarjuna is also very saddened by the decision of both. Meanwhile, filmmaker Ram Gopal Varma has made a tweet regarding marriage and divorce, in which he has described ‘marriage as death and divorce as rebirth’.

Ram Gopal Varma made many tweets regarding marriage and divorce

Ram Gopal Varma made several tweets one after the other regarding marriage and divorce, which is becoming viral on social media. His first tweet in this episode is, ‘Divorce should be celebrated not marriage… Marriage is death and divorce is rebirth.’ With this post, he has also shared a link of one of his old videos, in which he is seen speaking all these things.

Not Marriages, Divorces should be celebrated..Marriage is death and Divorce is rebirth💐💐💐 https://t.co/87HKdcAQ6L via @YouTube

In another tweet, the filmmaker wrote, ‘Marriage is British rule… Divorce is freedom… Marriage is Hitler, the birth of war. Divorce is the freedom won by Gandhiji. 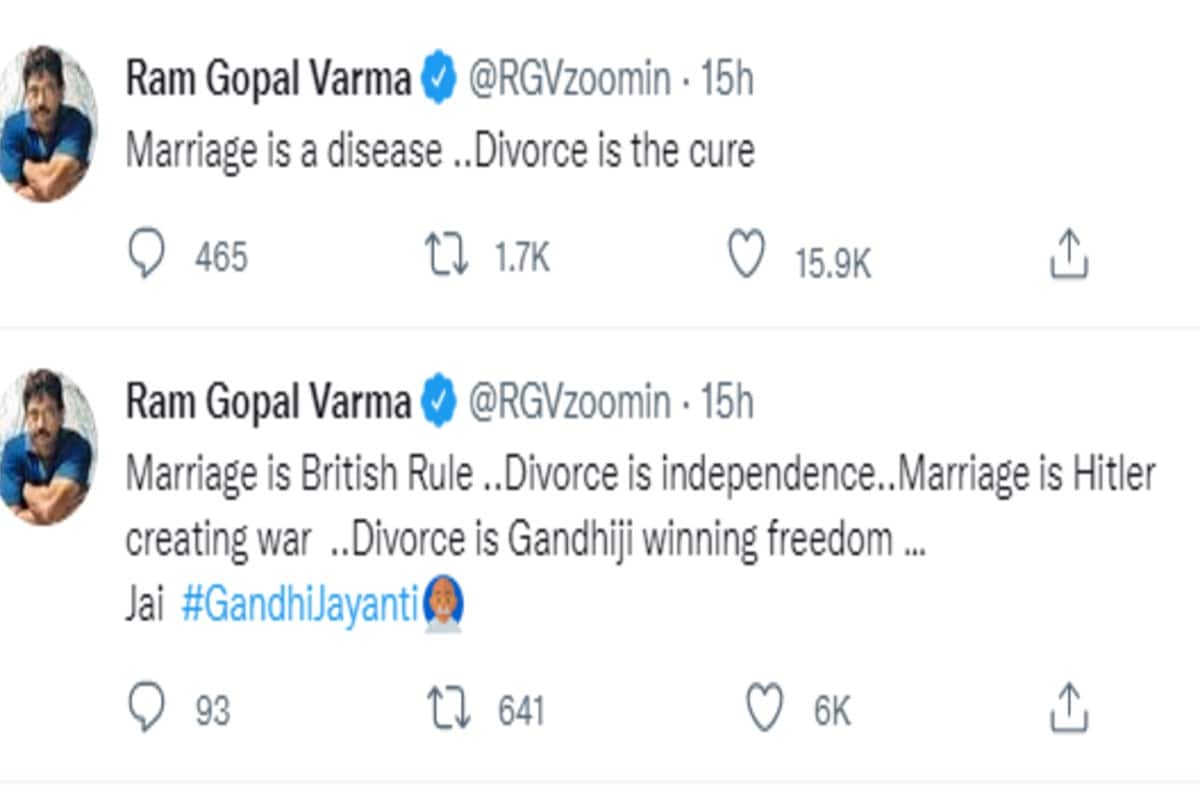 Ram Gopal’s third tweet in this episode is, ‘Marriage is a disease… and divorce is a cure.’ After this he wrote in the fourth tweet, ‘Divorce should be enjoyed more than marriage. Because in marriage you do not know what you are getting. Whereas in divorce you come out of it.’ Ram Gopal Varma wrote in the fifth tweet, ‘Marriages are like hell and divorce is like heaven.’ After this he wrote in his last post, ‘Most marriages last only a very short time. A real concert should happen even after the divorce. Where people can enjoy it by dancing and singing. Similarly, Ram Gopal Varma’s tweets are going viral on social media and people are getting to see a lot of reactions. Let us tell you that earlier he had made similar tweets on the divorce of Aamir Khan and Kiran Rao.

I once again want to clarify that the guy in this video is not me and the Girl in Red is not @inaya_sultana and I swear this on American President JOE BIDEN pic.twitter.com/K8nNera7Rc

Filmmaker Ram Gopal Varma, who described marriage as hell and divorce as heaven, once went viral on social media, a ‘vulgar’ video of himself, in which he was seen dancing with a girl in a ‘clumsy’ way. He was also trolled fiercely and also told the truth.