Sooryavanshi will release on Diwali, Rohit Shetty confirms in a unique way

Mumbai: Good news for cinema lovers, ‘Sooryavanshi’ is releasing on Diwali after a long wait. Filmmaker Rohit Shetty gave this information by posting social media on Saturday. Akshay Kumar and Katrina Kaif starrer Ranveer Singh, Ajay Devgn are doing cameo in this film. The film was earlier to be released in March, but could not be released due to the Corona epidemic. Now that Maharashtra Chief Minister Uddhav Thackeray has announced the opening of cinema halls, the ‘Khiladi’ of Bollywood says ‘Ab roke na rukegi’.

The Maharashtra government has announced the opening of movie theaters from October 22, so Rohit Shetty has also confirmed the release date of the film without naming ‘Sooryavanshi’. Rohit shared a photo of himself with Maharashtra CM Uddhav Thackeray on Instagram and wrote in the caption, ‘Thanks to Hon’ble Chief Minister Shri Uddhav Thackeray, theaters are reopening in Maharashtra from October 22. And finally we can say that this Diwali… the police is coming…’. It is interesting that in this photo CM Uddhav and Rohit are seen in blue shirt and khaki pants. Akshay Kumar, the lead actor of ‘Sooryavanshi’, shared a BTS picture with director Rohit Shetty, Ranveer and Ajay and wrote, ‘Many families will be thanking Mr. Uddhav Thackeray today. Thanks for opening cinema halls in Maharashtra from 22nd October. Now no one will stop – the police is coming #SuryavanshiDiwali 2021’. 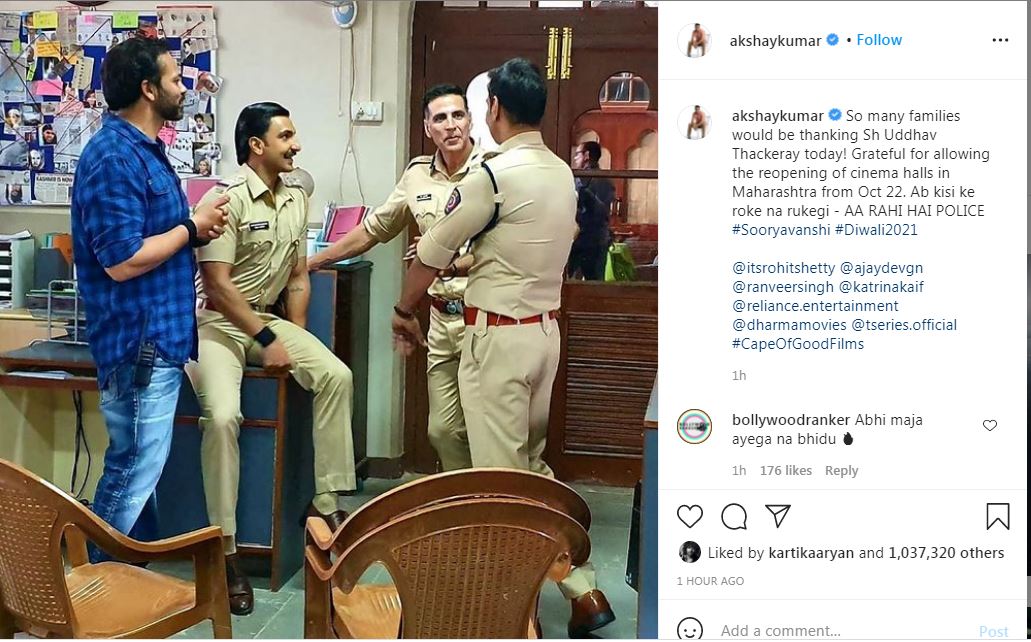 Also read- Jacqueline Fernandez’s act won the hearts of the fans, rewarded the child for praising

Let us tell you that Akshay Kumar will be seen playing the role of police in this film. ‘Sooryavanshi’ is a part of Rohit Shetty’s cop universe. It started with Ajay Devgan starrer ‘Singham’. After this Ranveer did the film ‘Simmba’ and now Akshay Kumar is carrying forward this tradition.