Suhana Khan shared a mirror selfie in a black outfit, fans were blown away by her bold style

New Delhi: Shah Rukh Khan’s daughter Suhana Khan is always in the headlines. She always keeps sharing new pictures. Apart from them, she is also in discussion about her styling and dressing. A picture of him becomes viral as soon as it comes on social media. He has a huge fan following without debuting in Bollywood. Shahrukh Khan has already indicated that Suhana Khan will make a career in Bollywood only as an actress. 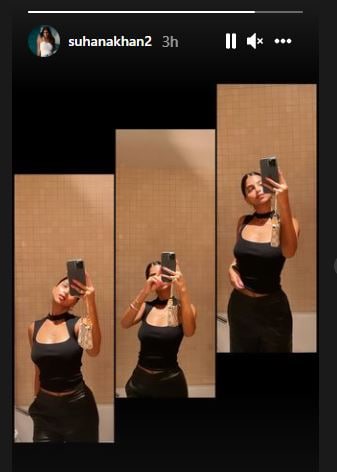 People are liking this picture of Suhana Khan.

However, he has not put any caption of this mirror selfie. She is wearing a black outfit in it and is also carrying a clutch. It looks like this picture was taken in the washroom. Last week also he shared some pictures of his outing.

His friend Shanaya Kapoor also praised his look in the comment. Suhana also posted a picture of her apartment in New York on social media. Suhana Khan is all set to enter Bollywood but Shah Rukh Khan wants her children to enter Bollywood only after completing their studies.

In an interview to ‘Vogue’, she said, ‘I don’t remember that there was a moment when I decided that I wanted to be an actress. But when my parents saw my first performance, they thought I could act.

The second spring of ‘Sholay’ came on the stage of KBC, seeing which Hema Malini also stood up from the hot-seat

When Raj Kapoor scolded Shammi Kapoor for adding tobacco, he said – ‘I am not ashamed…’

Nora Fatehi is also a victim in 200 crore cheating case, helping ED by becoming a witness