Rakhi Sawat narrates to AAP leader Raghav Chaddha- said- ‘Stay away from me or else your…’, see VIDEO

Rakhi Sawant’s name suddenly created an uproar in the corridors of politics on Friday night. Rakhi, known as the drama queen in the entertainment world, did nothing on them, but even after that she became a part of politics. Actually, the name of item girl Rakhi Sawant echoed in the politics of Punjab when Aam Aadmi Party leader Raghav Chaddha called Congress leader Navjot Singh Sidhu the Rakhi Sawant of Punjabi politics. Rakhi was so annoyed by this that AAP leader Raghav Chadha gave a warning.

Rakhi Sawant is very active on social media. She is often seen talking on every issue with the paparazzi. Actually, on the previous day, senior Congress leader Navjot Singh Sidhu had a big statement about Delhi Chief Minister Arvind Kejriwal. After this, Aam Aadmi Party leader Raghav Chadha targeted Navjot Singh Sidhu and called him Rakhi Sawant of Punjab politics.

The way in which Rakhi Sawant’s name has been dragged in the backlash of the leaders, the actress slammed the AAP leader. Talking to a channel, Rakhi Sawant said in a stern tone- ‘Stay away from me and my name. Whoever Mr. Chadha is not, neither will you take my name nor will I take off your chaddha. I am trending right now. Mr Chaddha you see yourself, you needed my name to come in trending.

Let us tell you that Rakhi Sawant has shared a screenshot of a Twitter post on her Instagram, in which a person named Ritesh has tweeted. In his tweet, the person tagged Raghav Chadha, Punjab Police, Congress, Aam Aadmi Party, BJP and wrote, ‘Don’t spoil anyone’s image for your political gains. Please educate your MLA. If I educate, AAP will not be seen anywhere. According to Rakhi, Ritesh, who tweeted is her husband. 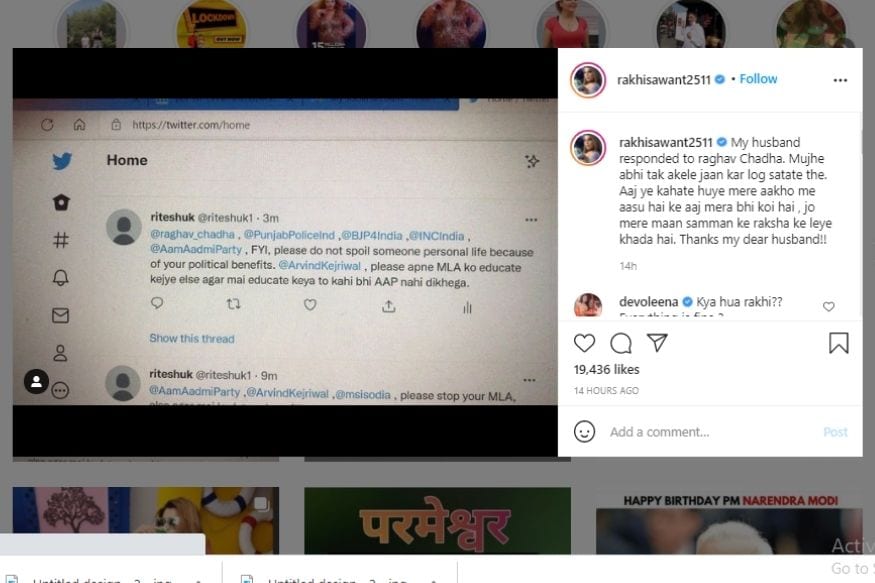 Sharing this tweet, Rakhi wrote the caption- ‘My husband has replied to Raghav Chaddha. People used to harass knowing me alone till now. Today I have tears in my eyes saying that today I also have someone. Who stands to protect my honor. Thanks my husband’.