Kangana Ranaut played the character of Sita even in childhood, shared this beautiful picture of school drama

Mumbai: Bollywood actress Kangana Ranaut is enjoying the success of the film ‘Thalaivi’. Meanwhile, Kangana told a day ago through a social media post that she has signed a new film. The name of this film is ‘Sita- The Incarnation’. This is an epic drama. In the film, Kangana will play the title role i.e. Sita. After this announcement, he shared a childhood picture on his Insta story. Sharing this picture, she told that she has played the role of Sita even in childhood.

In the childhood picture shared by Kangana Ranaut Childhood Photos, she is standing with another girl. Kangana has covered her head with a red sardine. The chunni is held with one hand, while the other is in a blessing posture. Sharing this picture, he wrote, “I played Sita in a school play too. I was 12 years old then. Glory to Siyaramchandra.” With this, he has included a hand-joining emoji in his caption. 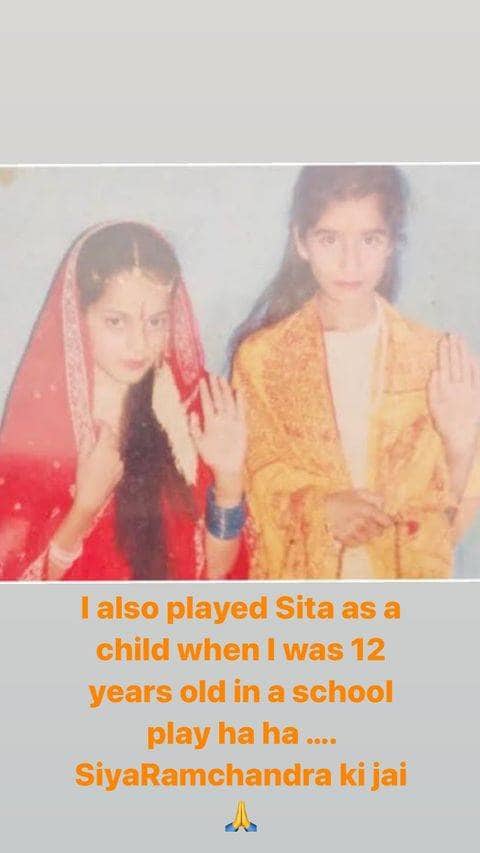 Sharing the poster of the film ‘Sita – The Incarnation’, Kangana Ranaut wrote, “Happy to be getting the title role with a great cast team. With the blessings of Sitaram. Hail Siya Ram.” ‘Sita’ will be another Pan India film of Kangana which will be released in 5 languages. Aaluk Desai is going to direct ‘Sita’.

Recently, the name of actress Kareena Kapoor Khan was coming up for the lead role in ‘Sita – The Incarnation’. But reports claimed that Kareena had demanded very high fees for this role. Kareena was also trolled about fees and Sita’s character.

SS Studio Producer Saloni Sharma said, “As a woman, no one could be happier to welcome Kangana to this film than me. Kangana has all the qualities of a real Indian woman. He is fearless, brave and outspoken. This is an occasion to celebrate equality in every sense.

Samantha Akkineni had a lot of fun with her ‘Best Company’, wrote a special thing by sharing the video