Mumbai: Whether it is news of the death of veteran actor Dilip Kumar of Hindi film industry or to give updates about the health of Saira Banu, only a person named Faisal Farooqui has been giving all kinds of information. Faisal, close to Dilip Sahab and Saira’s family, was also seen as a spokesperson several times. Now Faisal has given another big news about the late actor. It has been a long time since Dilip Kumar died, but till now his Twitter account was running. Now it has been closed forever.

Faisal Farooqui has given information about the closure of Dilip Kumar’s Twitter account by tweeting. By sharing a photo of him on Dilip Sahab’s Twitter, he has told about it. Faisal has written, ‘After much discussion and discussion, with the consent of Saira Banu ji, I have decided to close the Twitter account of Dilip Kumar Sahab. Thank you for your constant love and support – Faisal Farooqui. In this way, this is his last tweet from Dilip Kumar’s account.

After much discussion and deliberation and with the consent of Saira Banu ji, I hv decided to close this twitter account of beloved Dilip Kumar Saab. Thank you for your continuous love and support.
-Faisal Farooqui pic.twitter.com/NAabHe1DZu 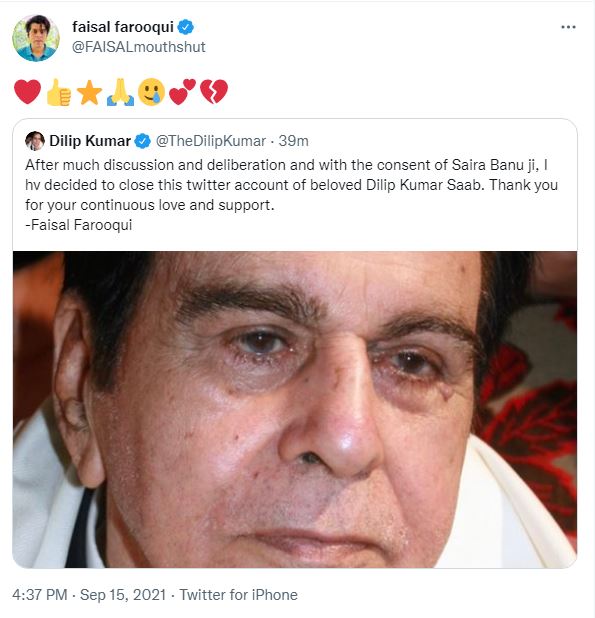 Let us tell you that Bollywood veteran Dilip Kumar died on July 7 this year. Saira Banu has become quite lonely after his departure. Recently she was also ill and was admitted to the hospital. Faisal was also constantly giving information about the health of Saira ji to the media.

Also read- Saira Banu was seen for the first time after being discharged from the hospital, Dilip Kumar’s photo seen in her hands

When Dilip Sahab was alive and was ill for a long time, during that time in an interview given to the media, Saira Banu had said, ‘I do not serve Dilip Sahab under any pressure, it is a feeling beyond love. I don’t even do this because people praise me for being a good and devoted wife, I do it just because I can be with them forever. Hugging them, touching them is the best feeling in the world for me. He lives in my breath’.

Two and a half kilos of gold, a lot of mobile phones… Delhi Police caught snatched Indian Idol Contestant

South actress Rashmika Mandanna said ‘see the magic in my eyes’, there was a flurry of comments