0
SHARES
18
VIEWS
Share on FacebookShare on Twitter
If you are a fan of TV’s most liked show ‘Taarak Mehta Ka Ooltah Chashmah’, then you must know every character of Shay very well. Actress Priya Ahuja, who became popular from house to house for the character of Rita Reporter in the show, may have been missing from the show for a long time, but she remains very active on social media. Recently she shared some of her pictures on social media, after which she became a victim of trolling, the reason was only that in the pictures she was seen flaunting the bra strap. When the trolls targeted her, her husband and the director of the show Malav Rajda gave a good answer to it.

Rita Reporter ie Priya Ahuja has shared two pictures on her Instagram account, in which she is seen exposing the bra strap. Priya is seen in the pictures in a blue denim shirt and black pants. Priya’s stunning look is seen in minimal makeup and open hair.

While sharing the pictures, he wrote the caption- ‘Whatever is good for your soul, just do it’. These pictures have been clicked by her husband Malav Rajda. 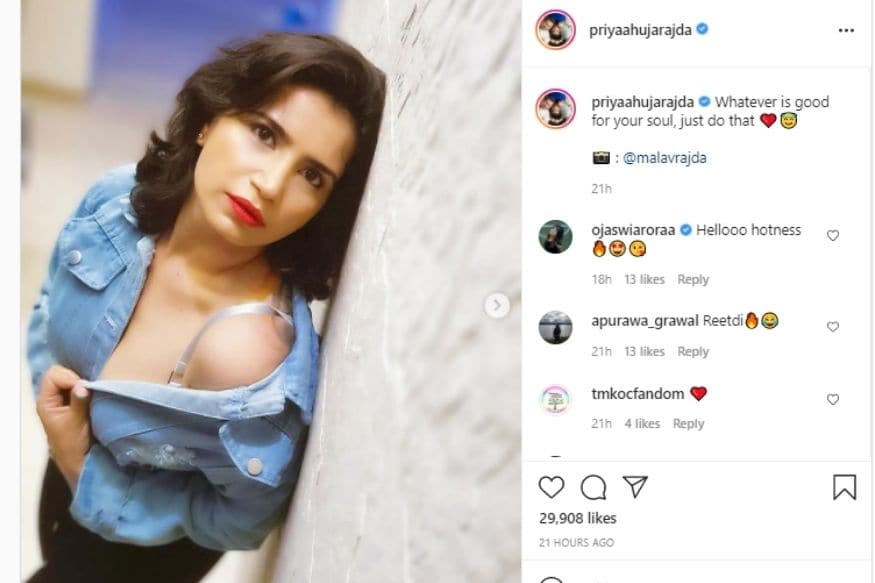 When the trolls started teaching her the lessons of Priya Ahuja civilization, then husband Malav came to the rescue of the wife. On the lewd comment of a user, he wrote- ‘Look at your mother or sister by speaking, see what they react’.

Let us tell you that after pregnancy, Priya has been away from the show for a long time. The actress did not travel with her husband and son Ardas to Gujarat, where the sitcom was shot outdoors. Because Maharashtra was in lockdown. However, as things are slowly returning to normal, the cast and crew have returned to Mumbai. Normal shooting has been resumed in the popular Gokuldham Society.

Arbaaz Khan does not like anyone calling Georgia Andriani his ‘girlfriend’ or ‘babe’, know why the actor said this thing

Radhika Apte and Rajkummar Rao will be seen together on Nextflix, Monica, O My Darling’s first look released

‘Why is a woman responsible for a man’s mistake?’, Richa Chadda came in support of Shilpa Shetty and said big thing